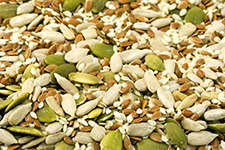 Chicago, July 14, 2016 – Neo-Pure, the first-ever validated intervention created specifically to control pathogens on seeds and grains while keeping them raw, organic and viable, will launch at Chicago’s #IFT16 – the Institute of Food Technologists annual conference – starting July 17 in Chicago. Food safety science company Agri-Neo is showcasing its intervention that integrates its novel Neo-Pure liquid solution and dedicated Food Safety System at #IFT16 Booth 4617. They will also be highlighting their growing customer roster, including Everspring Farms, who have incorporated all natural, biodegradable Neo-Pure into their processing of raw and sprouted seeds and grains.

“Processors of seeds and grains face a tricky food safety problem,” said Agri-Neo President and COO Rob Wong. “Chia, flax, sunflower, quinoa and other dry foods in raw and ready-to-eat forms have all been implicated in recent product recalls because of microbial contamination. But until now, no process or product addressed the specific needs of seeds and grains. Existing intervention steps used for dairy and fresh produce, including pasteurization, chemical fumigation and irradiation, alter seeds and grains by degrading the sensory and nutritional qualities consumers want.”

Neo-Pure solves that dilemma by providing food safety as nature intended. Derived from plants, it harnesses the power of oxygen to control pathogens and unwanted microbes. The Neo-Pure liquid solution is applied in its dedicated Food Safety System to ensure total coverage of every seed and grain. Working with academic institutions, Neo-Pure has been validated to provide a 5-log reduction of pathogens like Salmonella. The innovative Neo-Pure intervention keeps seeds and grains raw, organic and viable, without altering their organoleptic and nutritional properties.

Commenting on the decision to incorporate Neo-Pure in its processing, Everspring Farms Founder and President Dale Donaldson said, “Producing a wide variety of sprouted and non-sprouted grains and seeds, including ancient grains from all over the world, one of Everspring’s fundamental risks has become the ability to ensure product that is free of pathogens and has a plate count of spec that’s within the range our customers want. That’s why we installed the Neo-Pure Food Safety System. It delivers the safety we need, with no heat involved, so there’s no sensory change in the product. Taste and texture are unaffected. Grain looks, smells and tastes just like it came out of the field after the Neo-Pure process, and that’s a critical part of what we’re all about. Neo-Pure really differentiates us in the marketplace, allowing us to provide the safest possible product to our customers.”

Agri-Neo’s mission is to help safely feed the world. The vision of the company and its founders is to set new food safety standards, starting with Neo-Pure for seeds and grains. Since 2009, Agri-Neo has invested significant resources from private investors and grants in research and development. The company assembles its Food Safety Systems for Neo-Pure in Toronto, where it also conducts food safety science performed by chemists, microbiologists and engineers. For more information, visit www.agri-neo.com. Follow us on Twitter and learn about us on LinkedIn.